Under Vernon’s mayor-council form of government, the mayor is elected directly by the voters and serves as the township’s chief executive. In this capacity, the mayor oversees the day-to-day operations of Vernon, enforces all ordinances, appoints department heads and prepares a budget, all with the assistance of a business administrator.

The mayor attends council meetings and takes part in its discussions but does not have a vote, except when a tie vote in filling a council vacancy occurs. 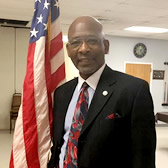 Mayor Howard Burrell was sworn in on January 1, 2020 for a four-year term and is the third directly elected mayor of Vernon under the township’s new form of government.

Mayor Burrell was born and raised in the small southern town of Utica, Mississippi.

He attended undergraduate school at Tennessee State University in Nashville, where he earned a bachelor of science degree in business administration. While at Tennessee State, he was a member of the U.S. Air Force Reserve Officer’s Training Corps, and upon graduation, was commissioned a second lieutenant in the Air Force.

Mayor Burrell was nominated by the governor of New Jersey and confirmed by the Senate Judiciary Committee to become one of seven state commissioners on the North Jersey District Water Supply Commission, where he currently serves as the commission’s chair and a member of the Audit Committee. He also represents the commission as one of four directors on the board of the Dundee Water, Power & Land Company, a New Jersey corporation owned 50% by the commission with United Water Resources, Inc.

He currently serves on the State of New Jersey Selective Service System Local Board, New Jersey’s Fifth Congressional District Service Academy Nomination Selection Committee and the Centenary University board of trustees. He is also a life member of the Vietnam Veterans of America, Inc.

While in the Air Force, he served as a special agent with the Air Force Office of Special Investigations, managed the Air Force’s Drug & Alcohol Abuse/Human Relations Education Programs at Air Force bases in the country of Turkey and in the U.S. and managed an Air Force doctors’, nurses’ and lawyers’ recruitment unit. He departed the Air Force as a Vietnam-era veteran after having achieved the rank of major.

Mayor Burrell has worked as an assistant director in the New Jersey Department of Labor & Workforce Development, as the special assistant to the president of Felician University, NJ, as an adjunct professor in the Department of Social Sciences at Centenary University, NJ, as a buyer for one of America’s largest home appliance manufacturers and as a sales representative, a regional sales manager, the corporate customer service manager, and the international sales manager for a major specialty chemical company.

He was awarded the distinction of being selected as a Gates-Ferry Distinguished Visiting Lecturer at Centenary University, and has received Felician University’s Dr. Martin Luther King, Jr. Legacy Award and the NAACP’s Presidential Award for a lifetime of service.

In addition to a bachelor’s degree in business administration, he also holds a master’s and a doctorate in psychology.

He has been married to Reba Burrell, a retired schoolteacher, since 1966, and they have three adult children and two grandchildren.